A series of novels and stories in a fantasy space opera universe.

THIS WEBSITE IS MOVING!  Over the next couple of months I will be transferring everything over to the following URL:

Please update your links!  Thanks!

Welcome to the home page for my fanfiction novel saga, "Toy Soldier," set in the Dungeons & Dragons Spelljammer® fantasy universe.  Dungeons & Dragons® is a registered trademark of Wizards of the Coast Inc.®, a subsidiary of Hasbro, Inc.

To watch my other book trailers, click the link provided, see the Videos Page or check out the title page for each novel.

Book One "A Few Good Elves" - Four hundred years ago, the spaceways were shaken by the First Unhuman War, as elves and orcs pitted their best spacefaring skills against one another. The orcs were at last defeated and imprisoned. Now war has broken out again, and young elven pilot Shaundar Sunfall is ready to answer the call and face his people's ancient enemies; but he learns that war is no great adventure.

Book Two "Brothers in Arms" - After elven pilot Shaundar Sunfall's ship is destroyed and he is imprisoned and tortured, bent on revenge he joins a secret program to infiltrate these new, highly advanced orcs called the "scro," and learns that perhaps they are not so different after all. This knowledge forces him to tread carefully between conflicting loyalties in order to avoid betraying any of them.

"Book Three "Sable's Privateers" - In the aftermath of the Second Unhuman War, still reeling from the destruction of his planet and his betrayal by the Imperial Elven Navy, elven marine "toy soldier" Shaundar Sunfall dodges Naval prosecution and joins up with his sister to become a privateer.  Can this ragtag band of misfits teach him how to trust again?

Book Four "Sweet Water and Light Laughter" - With the death of his sister and the unofficial disbanding of Sable's Privateers, elven ex-marine Shaundar Sunfall  finds himself adrift, until he unexpectedly falls in love and makes the most unlikely of best friends - a drow.  He must then quest for the Crown of the Elven Empire on behalf of another Privateer - or wear it himself.  Worst of all, the Navy has asked him to return - as their Grand Admiral!  In all of this chaos, can Shaundar learn to be an elf again, and find peace at last? Or will his past finally destroy him? The first novel in the saga, "A Few Good Elves," was my entry in National Novel Writing Month 2011, a contest in which participants are challenged to write 50 000 words in the 30 days of November.  I succeeded in meeting the challenge.  I tried again with "Brothers in Arms" in 2012, but because I wasn't able to start until halfway through the month due to a deadline for my non-fiction book, "The Witch's Eight Paths of Power," this time I was not successful.  "Brothers in Arms" is still in progress, however.  I redeemed myself in 2013 when I was a winner with the first part of "Sable's Privateers."

Links to audiobook versions of each of the novels will be included on each novel page as well.  This is a work in progress.

About the Spelljammer® Universe

For those unfamiliar, Spelljammer® is a fantasy setting that combines high seas swashbuckling adventure with Star Trek® style space travel, "seeking out new life and new civilizations, boldly going where no one has gone before."  Flying ships sail into the stars with their own laws of magical physics (such as the magical helms that power the ships through the spellcasting power of the helmsmen, which also create their own "gravity planes"; also, any body in space is said to carry its own "air envelope;" how much air, and how long it lasts, depends on the size of the body, so you don't need airlocks and decompression is not a concern unless someone casts a disintegrate spell.)  If you have seen the animated film "Treasure Planet" (Disney 2002, or the recent re-release on Blu-ray with updated graphics that'll blow your mind) then you have some idea of how this works.

A wide variety of races can be found.  Some are the more familiar fantasy races of humans, elves, dwarves, halflings and so forth, and some are very alien, from the fantasy villain staples of beholders and mind flayers, to the unique giff, dracons, xixchil, and malevolent neogi.  The feel is very much like the Age of Sail and Golden Age of Piracy, just with aliens and the hazards of space instead of the high seas.

One basic principle of the Spelljammer® universe is based on the old Ptolemaic view of the cosmos.  Mini-universes (such as the Forgotten Realms® campaign world and surrounding planets) float in "crystal spheres" which bob along through a flammable, colourful and magical substance called "phlogiston," which nobody really understands.  This allows for limitless possibilities in creating worlds, even ones that do not conform to any of the laws of physics that we know.  For this reason, I love this setting and game in it often.

For more information, you may wish to check out Beyond the Moons, the official Spelljammer® website.  Or if you'd like a good laugh, combined with an excellent explanation of the setting, read this blog.  Also of interest is Jeff Grubb's (the developer's) secret history of Spelljammer.

As one sourcebook put it, "It's magic, and it knows it's magic."  So if you can't put aside your firm belief that "air go out like WHOOSH" on spaceships if you don't have everything sealed on the other side of an airlock, you're not going to enjoy the setting or my story.  I invite you to embrace infinite possibilities and take a voyage of imagination! "Battle at Faerun" by Silverblade the Enchanter

This series was, naturally, inspired by a Dungeons & Dragons® roleplaying game character.  I figured it was a good story and wanted to share it.  I had hopes of publishing with Wizards of the Coast® since rumour has it that they are reviving the Spelljammer® material for their D& D Next® game, but they do not want unsolicited manuscripts.  So if you would like to see these novels published, please tell them!

All book pages will include audiobooks posted on YouTube, because I believe in making my work accessible to everyone.  I am in the process of revising these to include theme music and sound effects.  You can pre-order the whole digital audiobook at my Bandcamp site for $1, which was the lowest fee I could charge by their rules.

The first book in the series, "A Few Good Elves," is set in the Second Unhuman War.  It represents my character's prologue.  I have made efforts to make sure that, as much as possible, it corrosponds to previously-published Spelljammer® material.

The second book, "Brothers in Arms," is the bulk of my character's unique back story, which draws on a limited amount of source material that I and my husband and co-DM thoroughly fleshed out for our campaign.  Though it is still part of the back story, much of this was actively played through as we were coming up with it so that we could sort it out for consistency.

The third book, "Sable's Privateers," was the beginning of the campaign and it began as the Second Unhuman War ended.  For that reason, much of it will be consistant with the published game material, but some of it may stray off-course slightly.  Also, you will find a lot more significant characters because we had a very large gaming group.

The fourth book, "Sweet Water and Light Laughter," represents more recent gaming events in our campaign.  Much of it will not corrospond to canon D&D® material, as each campaign world develops (as it should) based on the actions and efforts of the player characters.  It will also be simplified from our complex gaming campaign because I believe that otherwise, much of the story will be lost in the details.  Events may not happen in the same way or on the same dates as they did in the campaign to preserve suspension of disbelief.

This is a work in progress and it will be published to the site as I complete each chapter.  It may undergo several revisions after publication.  If you read my Blog page, or sign up for my Crew list (the link is on the sidebar) then I will keep you informed as to any changes as things progress. I make no promises as to my schedule of publication, so please do not write me asking when the next installment will be published.  I am a very busy person and so this project, much as I am drawn to do it, will have to take a back seat to my real life. "Toy Soldier" by Sable Aradia.  Background "To the Rescue Too Late" by John "Paladine" Baxter.  Used by permission. 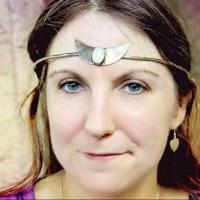 My name is Diane Morrison, and I am known in some circles as Sable Aradia or just Sable.  I am a metaphysical store proprietress, writer, singer/songwriter, artist, and professional Witch.  I'm a sci-fi, fantasy, historical adventure and war novel fan from early childhood.  I have been playing Dungeons & Dragons® since it was originally just called that, and went on to do all the stereotypically geeky activities of playing Vampire: the Masquerade® LARP, joining the Society for Creative Anachronism, and playing World of Warcrack (World of Warcraft®).  At one time I was one of the major contributors to Fantaseum, which was the largest Dungeons & Dragons Core Rules® website, and at one time I was the Assistant Editor for What's Brewin' e-magazine.  My first published book in print format, "The Witch's Eight Paths of Power," will be published by Weiser/Red Wheel books and hitting shelves in Fall of 2013.  I rarely have time for the SCA these days, but I still go to all kinds of Pagan festivals where I sell wares from my shop and teach workshops on Wicca and magick, and I still play our long-running, free-form D&D® game almost every day, though I have switched over to SWTOR® instead of WoW®.  Shaundar Sunfall, "Toy Soldier's" protagonist, is still a character that I actively play.

I have many other websites if you want to check them out; see the links above or in the sidebar.

I can't charge for this project because it is fan-fiction, and I really do want to get my name out there, but if you do feel inspired to support a starving writer, here's how you can.  Thanks!